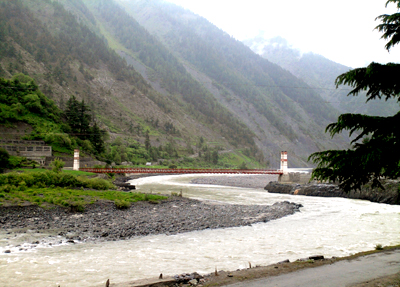 Kishau Dam Project would utilize the water of river Tons which is a major tributaryof river Yamuna and forms boundary between Himachal Pradesh and Uttarakhandin most of its reaches in this region. The water stored in the Kishau reservoir shall be utilized for irrigation, power generation and to augment drinking water supplyfor National Capital Delhi.

The river at project site forms the boundary between Uttarakhad and Himachal Pradesh. The project site is near Samberkhera which is about 50 kms upstream of Dakpathar in Dehradun district Uttarakhand and about 10 km. upstream of existing Ichari dam. The nearest Rail head is Dehradun, the capital of the state and thenearest air field is at Jollygrant which is about 20 Km. from Dehradun. From Dehradun project site can be reached by road. Two lane metalled road is available up to Ichari dam site (Koti). From Koti to Sambarkhera (about 10 km.), single laneroad is existing.

This is a multipurpose river valley project which is proposed to create a grossreservoir capacity of 1824 Mm3. Not only the state but the whole country is suffering from the shortage of power and irrigation facilities, which are the mainsources for industrial and agricultural development. At present a lot of untappedpotential in terms of power and irrigation of the river Tons goes waste as which can be utilized for development of irrigation and power by constructing storage schemes on it.

Kishau Dam Project envisaged the construction of a 236 m high concrete gravity dam along with a 660 MW capacity power house across the river Tons, a tributary to the river Yamuna, for harnessing the vast monsoon flow of river Tons by storing and utilizing the regulated release thereof, for irrigation and power generation.